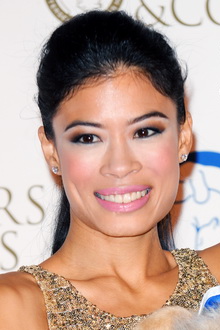 Vanessa-Mae (陈美 Chén Měi; born 27 October 1978) also called Vanessa-Mae Vanakorn Nicholson, is a Singaporean violinist with album sales reaching several million, having made her the wealthiest entertainer under 30 in the United Kingdom in 2006. She competed under the name Vanessa Vanakorn (; her father's surname) for Thailand in alpine skiing at the 2014 Winter Olympics. She was initially banned from skiing because a qualifying race for her benefit was alleged to be corrupt, but the Court of Arbitration for Sport later nullified the ban, citing lack of evidence for her own wrongdoing or any manipulation. The International Ski Federation later had to issue an apology to her. Provided by Wikipedia
Showing 1 - 2 of 2 for search: 'Mae, Vanessa, 1979-', query time: 0.07s
List  Tabulka
Search Tools: Get RSS Feed — Email this Search —
Loading...